Situated in the north of Italy, between the river Po and the Alps, Milan is the regional and provincial capital. With its 1.306.637 citizens, Milan is the second most densely populated city in Italy, after Rome; however its metropolitan area is much broader than that of the Italian capital. Milan is not just a big city: fashion, art and design, music, a wide range of fairs and exhibitions, passion for culture and for amusement, too, the ability to be modern and respectful of its own roots at the same time make Milan a unique and inimitable city. Three hundred years before Christ, the Romans called the city Mediolanum, or "the central pIace." By the 4th century, it was the capital ofthe western half of the Roman Em­pire. After struggling throughthe early Middle Ages, Milan rose under the powerful Visconti and Sforza families.

Milan's centerpiece is its magnificent cathedral, built from 1386 to 1810. Even though the Renaissance style, with domes and rounded arches, was in vogue elsewhere in Italy, conservative Milan stuck with Gothic, loading its cathedral with pointed spires and arches and lots of marble. The church is a classic example ofthe flamboy­ant, or "flamelike," overdone final stage of Gothic. The church boasts a soaring ceiling supported by sequoia­size pillars, brilliantly colored stained glass dating from about 1500: and more than 2,000 statues. Even more impressive is the roof. Walking through its forest of spires and statues, visitors enjoy great views of the city. Crowning the cathedral is a golden Virgin Mary named La Madonnina, an icon of Milan. The cathedral sits on Piazza del Duomo, Milan's main square. This classic European scene is a popular gathering point. Professionals scurry, stylish locals loiter and teens hang out in the afternoons, waving at MTV cameras sta­tioned in an upper-floor studio to catch the snippets ofthe same action you're seeing. 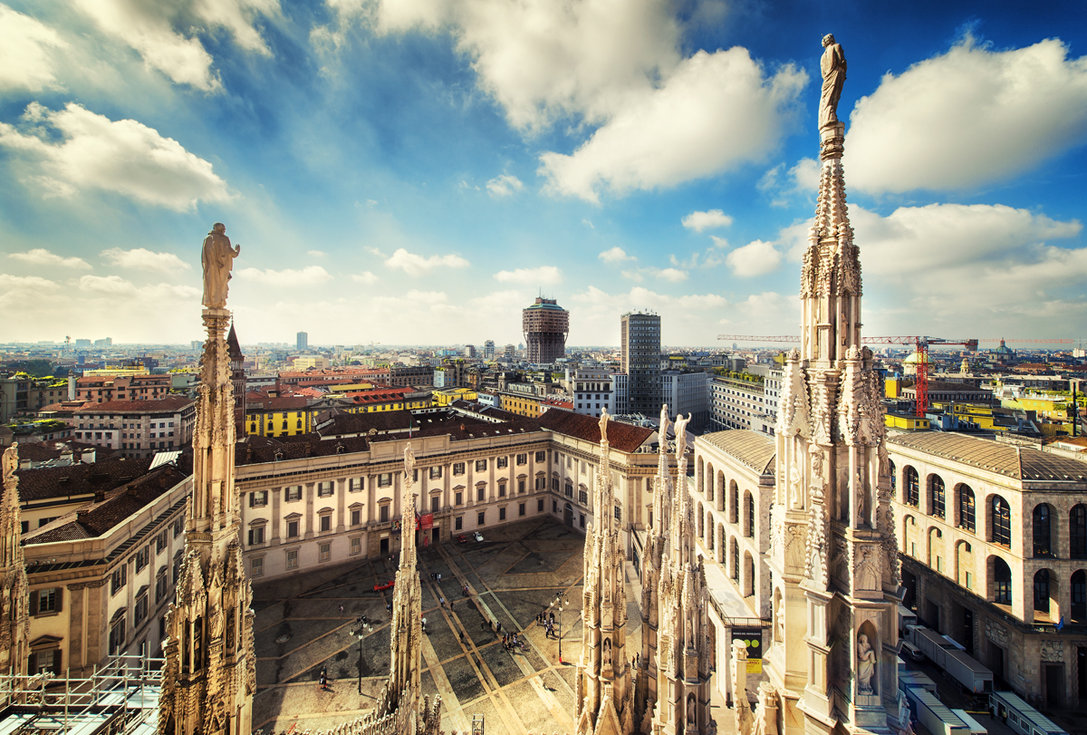 The grand glass-domed arcade on the square marks the Galler­ia Vittorio Emanuele. Built around 1870, during the heady days of Italian unification, it was the first building in town to have electric lighting. Its art celebrates the establishment of ltaly as an independent country; while high-end shops, restau­rants and cafes reflect Milan's status as Italy's fmancial and fashion capital. Behind the galleria is one of the world's most prestigious opera houses, La Scala. Though tickets are expensive and hard to get, a visit to the opera house's museum provides a peek into the theater. Since it opened in 1778, La Scala has been commitied to hosting the grandest of operas, including those of Giuseppe Verdi, the greatest of romantic Italian opera composers. In the 19th century; his name meant far more than music. He was a sym­bol of the movement toward Italian unification.

But perhaps Milan's most famous resident was Leonardo da Vinci, the great painter, sculptor, mathematician, mu­sician, architect, scientist and engineer. The brilliance of da Vinci is celebrated all over town. The Leonardo da Vinci National Science and Technology Muse­um features a hall full ofwood­en models illustrating his de­signs, as well as an entire collec­tion of industrial cleverness, including planes, radios, old musical instruments and even chunks ofthe first trans-Atlan­ticcable. Milan also is home to home of the Da Vinci greatest Masterpieces. Commissioned by the Sforza family; "The Last Supper" painting depicts Jesus' final dinner with his disciples. Decorating the dining hall of the Dominican monastery that adjoins the Church of Santa Maria delle Grazie, the fresco illustrates da Vinci's understanding of with the building's lines converging on Christ, making it clear that Jesus is the powerful center of it all.